Want to know more about mpox? Talk with one of our clinicians.

A Conversation with Living Legend Monica Helms, Creator of the Transgender Flag

To kick off Women’s History Month, we spoke with living legend Monica Helms, the seventy-year-old woman, author, wife, model rocket builder, and creator of the transgender flag. A lot has changed since 1999 when Monica first created the design for the trans flag. Now, with the trans rights movement on the rise, visibility can often be a double-edged sword. Especially for those living in the middle of the United States where there is often less access to resources, community, or a general sense of safety. Right now, 39 states are attacking trans youth through legislative measures set to limit the rights of autonomy of transgender young people in sports, bathroom access, and representation in the classroom.

For Women’s History Month, we are uplifting the voices and experiences of trans women across the country who are making history every day. As trans people, our history and our stories often go untold. If we don’t make the effort to record our lives, they will often go unremembered. And believe it or not, being trans is usually the least interesting thing about us. We met with Monica to talk about her story, what it’s like to live in the South, how visibility has changed over the decades, and what the trans flag means today.

Monica: My name is Monica Helms. I am a trans woman in Marietta, Georgia. I'll start with the transgender flag because everybody's going to want to know. In 1999, I was having dinner with Michael Page, who created the bisexual pride flag, and he said, “You know, the trans community could use a flag,” and so I said, “Well, okay.” So about two weeks later, I woke up one morning and the idea hit me. I got up and drew [the flag] out on a piece of paper. A week later, I had the first transgender flag, and I took it everywhere. The first place I took it  was the Phoenix Pride in 2000 and people were asking, “What is that?” So I told them what the colors meant. Light blue is a traditional color for baby boys. Pink is the traditional color for baby girls. And then white is for all people who are transitioning or non-binary, [those who] have nothing to do with the binary system.

FOLX: How did you find other trans people? There is pre-2000 for trans people and there is post-2000. Before 2000, it was much harder to find a sense of community or self. So to put a flag in the ground, and declare that we were a community was a huge deal at that time.

Monica: So I'm going to have to start from the beginning. In 1974, I was in the Navy and that's when I realized that I would like to dress as a woman. I didn't know what I was, I just knew that if the Navy found out that I was doing this, they would kick me out, so I had to be very careful.

I met a trans woman in 1978 who was living [her] life, but her life was not very appealing. She taught me a lot of different things, but it was terrible to see how she had to live.  She couldn't get a job, she couldn't get her driver's license changed, she had to get hormones the best way she could. So that kind of put a scare in me. But in the early 1980s, I was watching television and I saw this group of heterosexual cross-dressers and I figured well that's what I was because I was I liked to dress as a woman and I liked women. I wrote them and asked if there was anybody in Arizona trying to start a chapter. We met in a hotel, all six of us together. That was my first introduction to the trans community of sorts. 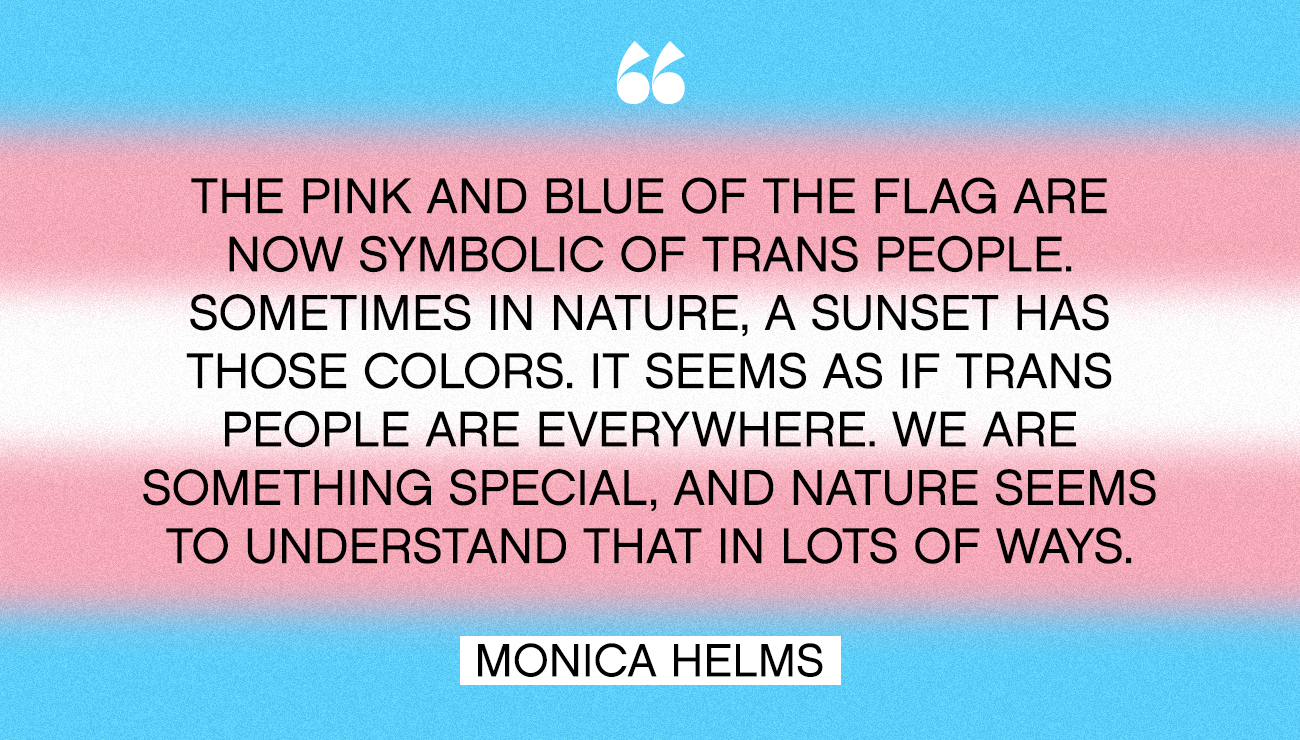 FOLX: Really appreciate you sharing all that. Often as trans people, our history is not well documented. When you decided to make the trans flag, what was your hope for it? What do you think it means to other people?

Monica: The reason I think that people took to it was that it was a simple design. The pink and blue of the flag are now symbolic of trans people. Sometimes in nature, a sunset has the flag’s color, and I kind of have to laugh. Somebody saw a digital view of Jupiter and saw the trans colors. So it seems as if trans people are everywhere, and, you know, we are everywhere. We are something special, and nature seems to understand that in lots of ways.

FOLX: How did you dig deep at that point in history and decide to transition? It was a much bigger decision in some ways to transition because there were fewer, you know, Harry Benjamin's standards of care.

Monica: I had a difficult time starting my transition, mainly because I was married with two kids. When I told my wife that it was something I wanted to do, she was not very happy. So from 1987 to 1997, when I actually finally [began to] transition, it was not a very comfortable time. My two sons were 13 and 15 at the time when I transitioned and I moved out of the house, so I realized that I was going to be living this life for the rest of my life. 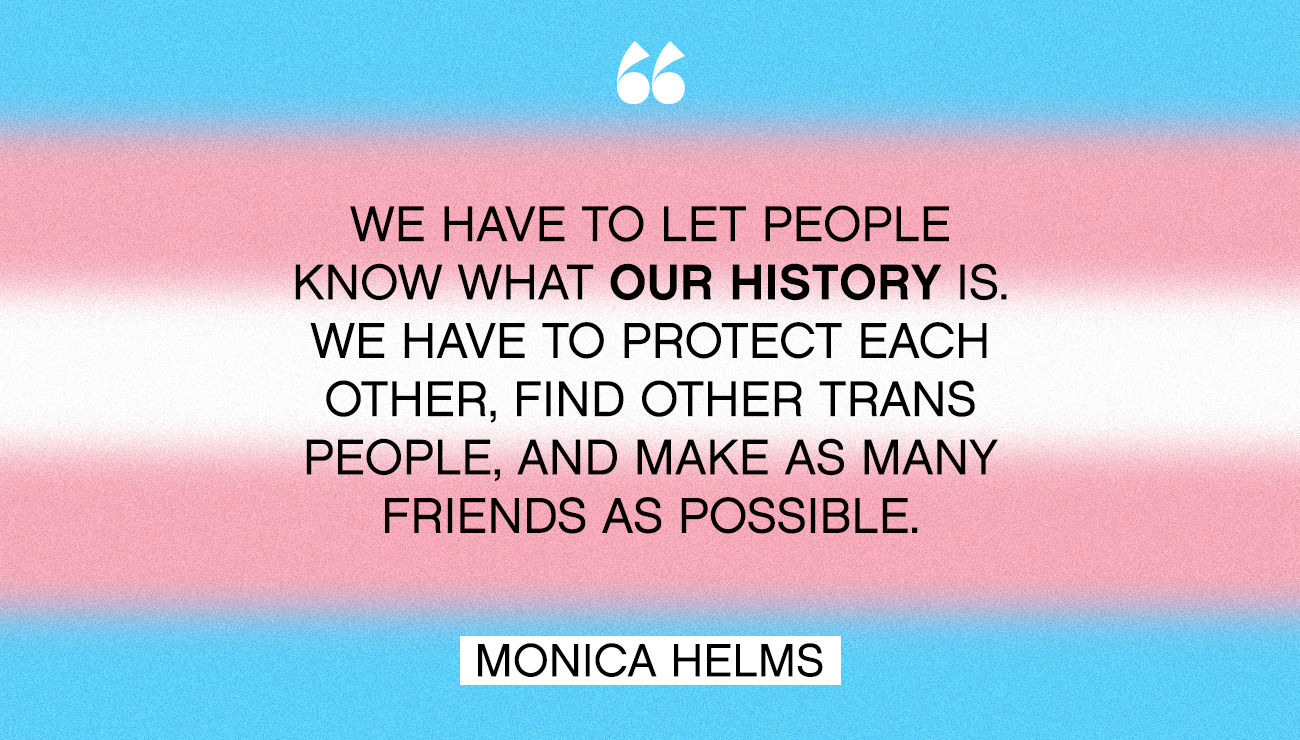 FOLX: Why is it important for the trans community to take care of each other?

Monica: I think that it is very important that we as trans elders help those who come after us. We have to let people know what our history is. We have to protect each other. Find other trans people, and make as many friends as possible. Safety in numbers is what it is. I'm going to say as a person who has been there and done that, “I'm here for you”

FOLX: Speaking of safety in numbers, how did your wife Darlene come into your life?

Monica: We met at what was called Contra Dance, which is an English style dancing similar to square dancing and line dancing combined. We danced, and we talked a lot. And then when it was all over, we went to a lesbian bar and talked and did some dancing too, and we decided that we wanted to see each other. And so for 15 years, we've been together.

FOLX: What do you love most about Darlene?

Monica: What I love most about Darlene is her butt. But, I’ll give you a real answer. She's a very wonderful, sensitive person that loves me as much as I love her. We go to bed every night saying, “I love you.” We wake up every morning saying, “I love you.” Sometimes when I have to get up and go to the bathroom, when I come back she reaches over and gives me a kiss.

FOLX: Why do you think it's important to include trans women in talking about women's history?

Monica: [Being a woman] has nothing to do with what's between your legs. It has everything to do with what's between your ears. If you feel that you are a woman, then you are a woman. And there’s this idea that God doesn't make mistakes. Well, you're right. God doesn't make mistakes. He made us purposely this way. I mean, what I like to say is Mother Nature understands non-binary and human nature does not.

FOLX: Do you have any reactions when you put the flag in the front?. Has anyone given you any problems or issues?

Monica: We put our flag outside for display. We don't put it in the front. We hang it off the back. But we haven't had anybody say anything. Nobody's even asked us what it was. So, hey, that's cool with me.

What LGBTQ+ Historical Figure Are You Based on Your Astrology Sign?